It has been a long trip, but finally my book is coming together. I’ve picked December 10th as my launch date. It’s an exciting and anxious time; right now I am sending the book around to potential reviewers as a means of promotion, releasing my story into the wild. Any writer would wonder: Who will like it? Where will it go? Time will tell.

In the meantime I have the cover to show off. My friend, Josh Payne, painted (yes actually painted) this scene.

To a writer, looking for fresh inspiration when creating historical fiction is an ongoing job. At times one can just trip over a great tale, but most often a story requires digging.

For me, weather-beaten objects can provide a good starting point. Last winter, while traveling through the hurricane-racked Caribbean, I was surrounded by the evidence of disaster. Each boat I saw, abandoned by wind and sea in some unlikely place, offered up a set of speculations: Where was this wrested from? At what point in the storm did it break free? How exactly did it land here? And then further back: Where did it come from? Who owned it? What were their hopes? Where are they now?

Let me turn now to the Falls of Clyde, an historic sailing ship lying in Honolulu Harbor. This once great square rigger has fallen on hard times. She is nearly one hundred and forty years old, and, despite the valiant efforts of local volunteers, has been in danger of being scrapped, or swallowed by the sea. I’ve walked her decks several times over twenty-five years, and each visit has lit up the imagination. Early on when the vessel was mostly intact, I could see her in her youth, her long, lean hull carving through the sea under a grand press of canvas. On later trips I took note of greater decay, and the individual efforts being made to paint bulwarks, or keep tar on the rigging. I wondered who was making the attempt to hold on. On my last visit the rigging had been taken down, and water was collecting below from leaks in the upper deck. My imagination ran down dark tunnels at that point; I began to speculate about what would happen should the volunteers stop attending the pumps. How long could this ship continue? What would be the final misfortune that would end her time? 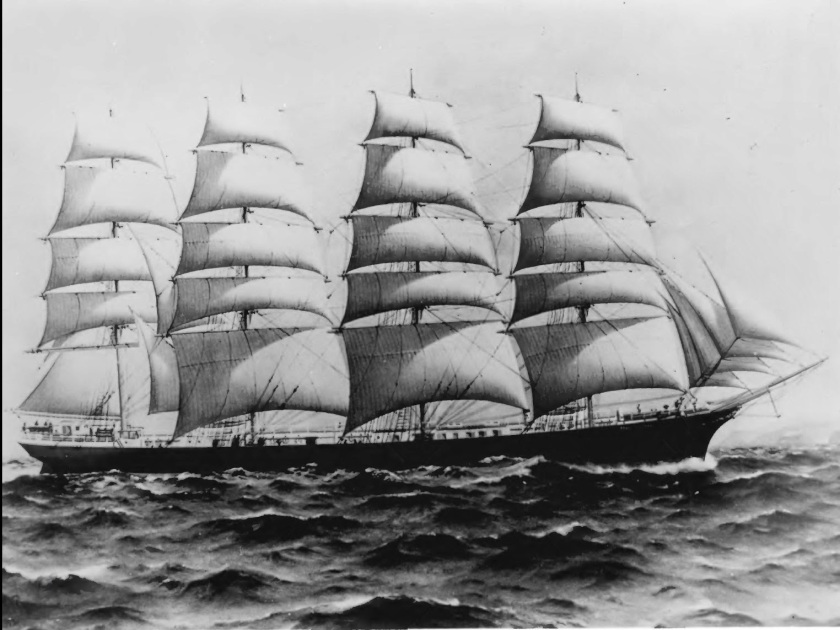 Happily, it is time for a new set of speculations. An organization named Falls of Clyde International has emerged with a plan to repatriate this storied ship to Scotland. They have secured a great deal, to have the Falls of Clyde transported on a huge dry-dock ship across the Pacific, through Panama and across the Atlantic starting in February. Once home, plans are in place to begin a full restoration. If you would like to help, you can find out more at: www.facebook.com/savefallsofclyde; e-mail directly to savefallsofclyde@gmail.com, or donate to their Indiegogo crowd sourcing campaign.

Falls of Clyde is a rare survivor of long sea travel, typhoons, and the ravages of salt and time. With broad-based support, future generations will be able to wonder about her long life and ask themselves: Who were the people who saved her?

That awkward looking chicken in red below is none other than the author of this post, come north now that the weather has warmed up. I’m not ashamed to admit that I try to hide from the cold. In this shot I’m splicing some new wire for the Oliver Hazard Perry, Rhode Island’s sailing school vessel.

Here also is my friend Boyd, serving up the topmast stays (a process of wrapping the wire in twine). This protects the wire from sea water and is a foundation for the seizings that form the terminal eyes.

After a few weeks of refurbishment, while we replaced the top section of the main mast OHP is ready to sail again.

If you get a chance, have a look at my stories page; I have written a couple of new shorts  while I’ve been preparing my first novel for print. A Dream of Steam—coming soon.

Caribbean islands are dotted with old forts and sugar mills. Whether he was a free man or a slave, the mason who built these steps left behind something useful that has seen the ebb and flow of power and human endeavor. Wouldn’t it be wonderful to be able to do the same?

A couple of months ago I posted that it was enchanting to watch the first snow fall. It is easier to feel that way if you know you won’t be shoveling in February, and just a few minutes ago, as I was waiting in line at the bank watching snow fall on television, I felt happy to be away. I’m in Antigua; my wife and I sail an old steel sailboat when we can get away so this winter we will be traveling northwest to Florida.

I’ve happened into blogging without much of a plan. It was suggested to me that this was a good idea for self promotion –and I can see it– but reading about somebody trying to write or get published seems like watching one of those news shows that tell you how they produce the news. I care about writing, but it’s only so newsworthy. I care about other things as well and so  while we are under way, en route to Florida, I think I will post about some of the places we stop, what the hurricanes have done, dark skies, dolphins and sea turtles. Hopefully I’ll get a few good pictures along the way.

Tonight I hope you are among family and friends. Peace.

Today I have been rewriting the first draft of a new short story. This is probably my favorite part of writing; I feel the excitement of forming something new whereas dreaming up the first draft feels like a trip to the gym after you haven’t been in a while. Pleasant as the writing was, I had to take a break to enjoy the freshly fallen snow. The first snowfall of the season can be magical; I have had huskies in the past and they always greeted the snow by digging their noses into it and throwing it up over their backs. Then they would enjoy a good rub down in the stuff, lying on the ground and kicking forward with their hind legs. Alas, one day it will all turn to slush and I’ll be back to writing query letters, but today is all for enthusiasm. 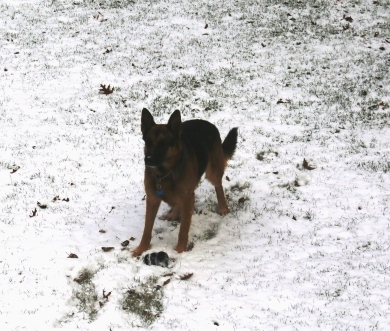 Within the light bulb is a vacuum that makes it possible for the filament to give us brightness. Within the pursuit of a publisher is a vacuum that pulls in your time and hope, and you feed it so that one day your book might be brought into the light. 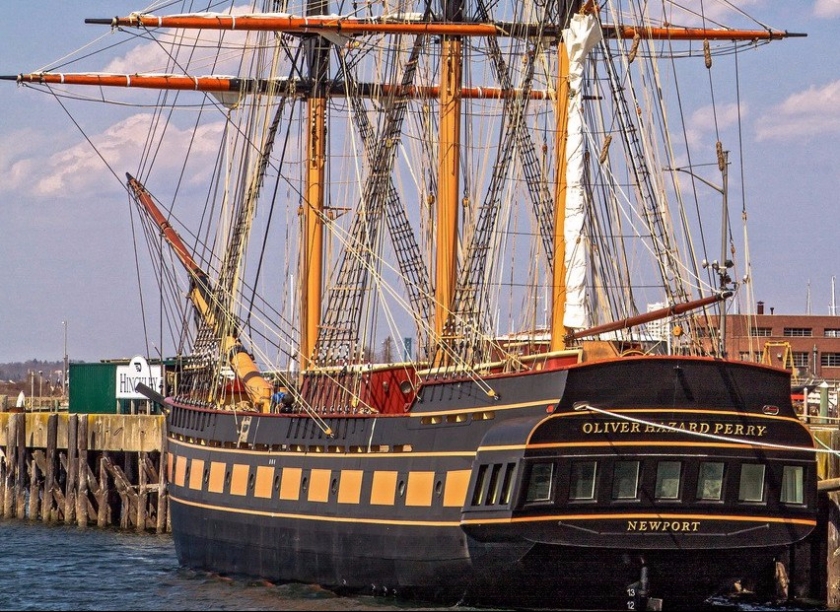 I’m back on the Oliver Hazard Perry for another semi-annual check up on the rigging. Last night as the ship was moving out of a dock in downtown Newport she got a line wrapped up in her propeller. The overloaded engine stopped. The captain gamely tried maneuvering between the closely spaced yachts with one engine, aiming to gain sea room or bump down on the commercial ship pier in the rising wind. It was difficult trying to get the bow into the wind and the OHP bumped into two yachts before moving away from them. And then, as the skipper was succeeding at getting the ship into open water, rather perversely, the other propeller sucked up a loose section of the same line that was caught in the first prop. Handcuffed, with no power any longer, he ordered the anchors dropped and slowed the ship’s drift until the crew got mooring lines out to nearby dock pilings. In all, there was minor (yet expensive) damage to four yachts.

The incident kicked off a media frenzy and the reporting has been a bit wild. Some reports went out that there was a person overboard; a crushed boat; a deck collapse, and that the ship was aground, none of which were true. It underscores to me that we are often reading fiction even though we sometimes believe it to be fact.

In the end no one was hurt. Kudos to the captain and crew for keeping a no win situation from becoming someone’s terrible loss.

Fall continues to be superb in the northeast, with clear, warm days and rainy nights. The squirrels have just about stripped a nearby hickory tree of nuts and now have them buried. I’m told that these busy creatures have almost no memory, so finding their own caches or others’ is a matter of scent and instinct. They make me wonder which little works of my own will turn out to help me, or someone else-or even a squirrel–down the road.